To download a PDF of this article:   Capillary Electrophoresis

From non-invasive procedures to ultra-sensitive diagnostic instrumentation, photonic devices play an indispensable role in today’s biomedical industry. Timely design and delivery to market of these new technologies has been possible only with the aid of sophisticated software tools and experienced optical engineers. Photon Engineering firmly believes that its optical engineering product FRED can help accelerate the pace of innovation in the biomedical community. FRED combines an intuitive graphical user interface with a powerful computational engine capable of satisfying the most demanding requirements.

The relevance of FRED to the biomedical industry can best be expressed by presenting several familiar yet innovative applications such as a gonioscope, laser-induced fluorescence in a capillary, and a human skin model.

Capillary electrophoresis is a technique used in genetic analysis and protein characterization. A collimated laser beam is focused into a glass capillary column where material flows under the influence of an electric potential. When particles pass through the illuminated volume, they fluoresce with a characteristic spectrum.

In Figure 1, a collimated rayset representing an UV laser beam is focused by an objective lens into a glass capillary filled with fluid. The mirror at top right enlarges the illuminated volume by reflecting unused light back into the capillary at a slightly different trajectory. The larger illumination volume increases the fluorescent signal. Optics oriented perpendicular to the illumination path collect fluorescent light for analysis. 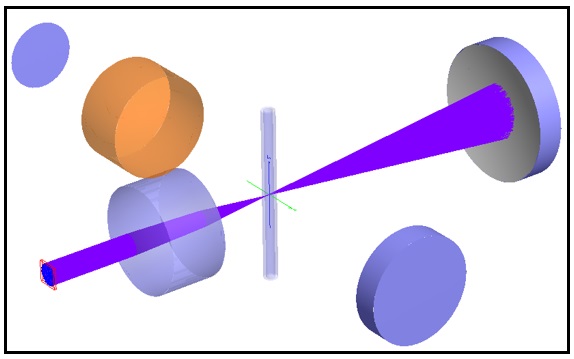 FRED can implement the phenomena of fluorescence through a specialized feature in its scattering library. A scripted scatter model can be constructed to reassign ray wavelengths by interpreting an emission curve in terms of probability. In this example, Rhodamine 6G, a widely used organic dye, will be used [1],[2]. The spectrum is digitzed using FRED’s Digitizer tool and the result is included in a Scripted Scatter Model.

To save simulation time, only scattered rays reaching the detector should be traced. The Importance Sampling feature in FRED serves just this function. To set this up, the user needs to select the fluorescing object in the model and click the Scatter tab. After assigning the Scripted Scatter property of fluorescence to this element, the “Scatter Direction Region(s) of interest” is set to be “Toward an Entity” with the detector surface as the chosen target.

A graphical representation of the complete simulation is shown in Figure 7. Purple represents the illuminating path while the orange maps the fluorescence. 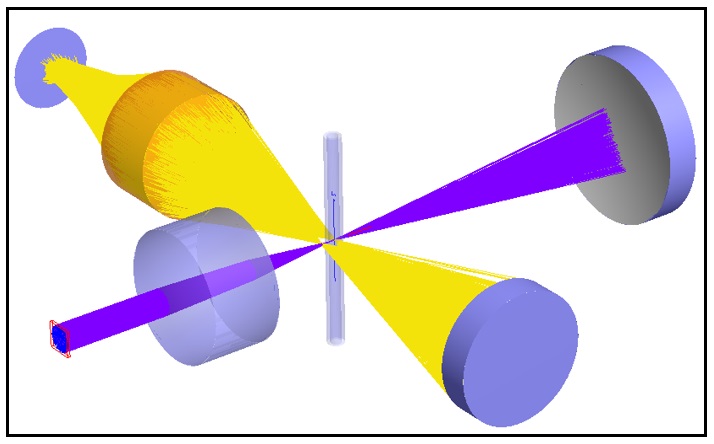