In the interferometer below, one arm of the interferometer contains a tilted flat mirror and the other arm brings light to focus using an ideal lens, where a reflector at focus returns the beam back through the ideal lens so that it can produce interference fringes at the detector.

If a pinhole aperture is placed at the focus of the ideal lens, just prior to the reflector, the focused field should be clipped and will form a quasi-gaussian profile in reflection.  At the detector, a tilted plane wave will interfere with the Gaussian returning from the ideal lens and produce interference fringes whose envelope is modulated with a Gaussian amplitude. 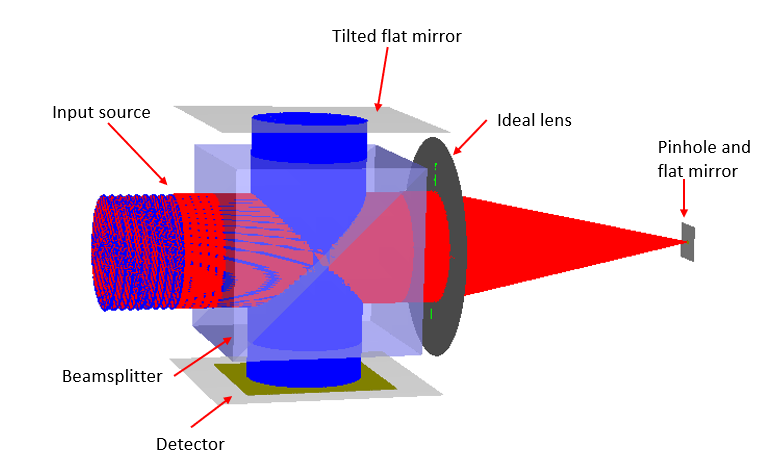 If the system is raytraced (Raytrace > Trace and Render) and the scalar field analysis is performed at the detector (Analyses > Coherent Scalar Wave Field), we get the distribution shown below.  Here, we see cosine fringes along the Y-axis (the direction of tilt in the reference flat) without any Gaussian amplitude modulation of the fringe envelope.  This is the behavior that we would expect if the pinhole aperture were not in place at the focus of the ideal lens.

What happened in this analysis?  One of the weaknesses of the Gaussian Beam Decomposition algorithm (which FRED uses for coherent field propagation) is that it is susceptible to undersampling the effects of apertures.  In this case, the problem is that during the raytrace the aperture applies to the geometrical rays carrying the field information and does not apply to the coherent field itself.  The geometric rays at focus of the ideal lens all pass within the pinhole aperture and, therefore, the pinhole aperture never operates on the coherent field itself.  So, it is as though the pinhole were not even present during the raytrace.

The way that this spatial filtering problem is dealt with in Gaussian Beam Decomposition is through the use of a directional field resynthesis (also known as a Gabor decomposition), where the field in the pinhole aperture is evaluated, the field is clipped by the pinhole aperture, and then the clipped field is represented by a new set of Gaussian beamlets which can then continue on through the rest of the system.  For most applications, this procedure looks like the following sequence:

Now, the problem with the above sequence in our interferometer example is that step #4 replaces all of the rays in the ray buffer with the new, synthesized rays representing the clipped field.  If we allow this to occur in the interferometer, we will successfully generate the rays representing the clipped field, but this will also replace the rays propagating in the reference arm!  We wouldn't end up with two beams interfering on our detector.

The embedded script, "Propagate with Resynthesis", takes the following steps:

If you right mouse click on the "Propagate with Resynthesis" embedded script and select, "Run an embedded script", the above sequence will be executed and the resulting coherent scalar wave field at the detector will be displayed.  We now see that the fringe modulation has a Gaussian envelope resulting from the application of the pinhole aperture at focus of the ideal lens.