FRED allows for simulation of physical optics phenomena such as diffraction and interference. With this capability, components such as Gaussian laser beams and interferometers can be accurately modeled and incorporated into optical systems.

Interferometer systems can be modeled in FRED using coherent lights sources. A Michelson interferometer can be found in the Coherence folder of the FRED sample files. It consists of a coherent plane wave source, beam splitter to divide the input beam, flat reference mirror, and test mirror. For this example we want to define a test mirror that contains a defect modeled as a Zernike function.

To add a defect, a dummy Zernike surface is created which is set to be Not Traceable – i.e. not included in the raytrace. Then, on the Modifiers tab of the test mirror’s reflective surface, this dummy surface is selected under “Apply another surface’s sag as a deformation to this surface”.

The coherent light source can be monochromatic or polychromatic; however, the maximum detectable defect is inversely proportional to the bandwidth of the source. 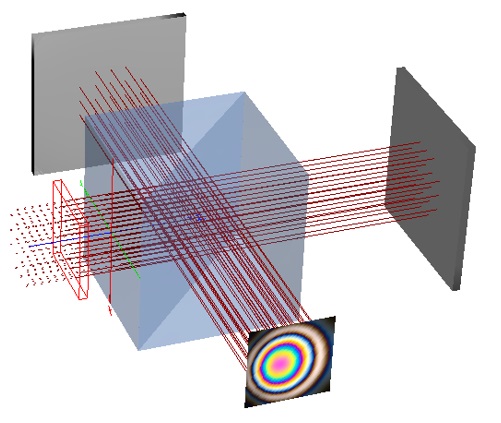