Light Emitting Diodes, or LEDs, have surpassed incandescent light sources in recent years for most applications. Benefits of the LED include compact size, high power efficiency, and a long lifespan [1]. LEDs also have undesirable qualities that optical engineers must address, such as the need for color mixing and collimation. In this example we look at a simple example of a color-mixing lightpipe.

As shown in the flashlight example, white light can be created using LEDs with a blue emitter and yellow phosphor. Another way to create white light is to mix appropriate proportions of red, green, and blue light. This approach gives more precise control of color temperature. If red, green, and blue LEDs are placed close together, color will eventually mix at a great enough distance. However, irradiance is spread over a much larger area and is not spatially uniform (Figure 1). 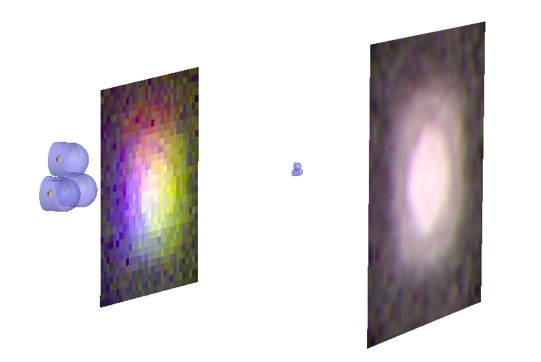 To uniformly mix wavelengths within a controlled area, a plastic hexagonal lightpipe can be constructed. The lightpipe is modeled as an Element Boolean object type. The first component of the Boolean is a rectangular block with dimensions of 14 x 14 x 100 mm (width x height x length). Four more rectangular blocks of the same dimensions are added. These blocks are displaced and rotated such that they trim each corner of the first block into a hexagonal rod. (Figure 2).

An alternative approach to model the lightpipe is to create a custom element consisting of a segmented curve (each point of the hexagon) extruded into a Tabulated Cylinder.

After performing a raytrace of the RGB LEDs through the lightpipe, uniform color mixing occurs. However, color temperature is too warm: red is dominating the color image. Once relative power output amongst LEDs is adjusted, white light is achieved in the color image (Figure 3).

[1] “New Report Explores the Global Industrial and Commercial LED Lighting Market to Be Propelled by Government Prohibition on the Use of Incandescent Lamps.” WhaTech. September 28, 2015. Accessed September 29, 2015.  https://www.whatech.com/market-research/consumer/97505-global-industrial-and-commercial-led-lighting-market-to-be-propelled-by-government-prohibition-on-the-use-of-incandescent-lamps.