To download a PDF of this article:  Mobile Displays

Mobile devices such as smartphones, e-readers, and watches are becoming ubiquitous in today’s world. Precise optical engineering is required to optimize the performance of mobile features such as the camera system, sensors, and the display.

A key design objective for a mobile display is uniform illumination over its area and range of viewing angles. In addition, it should have high optical efficiency to reduce power consumption and increase battery life. Edge-lit LED screens accomplish this by using compact and efficient LED lights coupled into a transparent waveguide. Elements such as reflective back surfaces, microstructure patterns, brightness-enhancing films, and diffusers can be incorporated into the display to increase efficiency and uniformity. In this FRED model, an edge-lit LED smartphone display is virtually prototyped. Uniform illumination is achieved by incorporating a gradient diffuser along the waveguide.

The first component in the system is a rectangular waveguide. A block with dimensions [25 x 40 x 1 mm] semi-width, semi-height, and semi-depth is created with the following properties:

The LED will be modeled as a small rectangular Lambertian emitter of dimensions of [1.8 x 0.7 mm] x-semi-aperture and y-semi-aperture embedded within the edge of the waveguide to maximize optical efficiency. This can described by FRED’s Detailed Optical source type.

An array of 5 identical side-by-side LEDs is created along the top face of the waveguide by right-clicking the completed LED source and selecting “Edit/View Array Parameters…” The spacing between LEDs is set to be 10 mm. 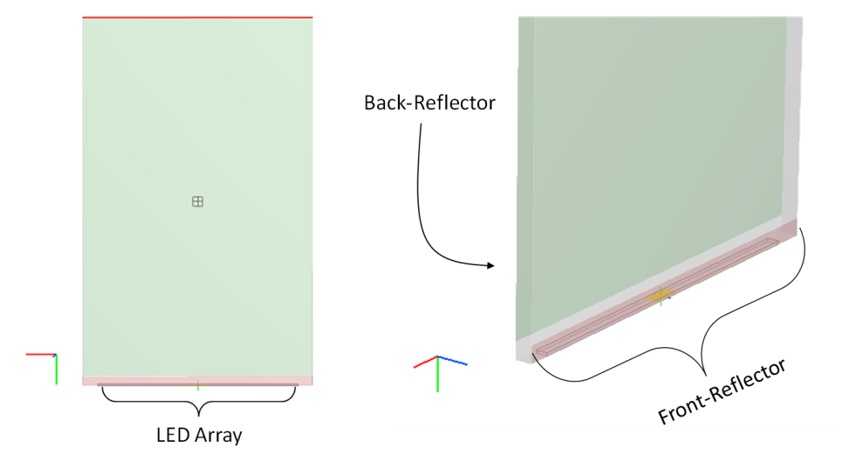 A new Scatter model is created using the “Scripted” option. Assuming that local y-position along the diffuser (g_Ypos) ranges from -40-40 mm, we create a variable “p” (probability of scatter) based on the following exponential function:

The parameters “a” and “b” are constants that can be adjusted. In this model, a=4 and b=0.04. Additionally, scatter occurs only for rays with y-positions sufficiently above the LED array (y>25 mm from bottom). This abrupt scatter “cut-on” counteracts the high-irradiance region near the light source.

Figure 4.  Assign the scripted scatter function (“Tailored Scatter” in this case) to the front or back of the waveguide under the Scatter tab of the surface.

The irradiance exiting the mobile display before and after the scripted gradient diffuser is shown:

Figure 5.  Log(10) of irradiance distribution from mobile display without diffuser (left) and with exponential diffuser (right). Logarithmic scaling gives a better idea of what the human eye perceives. 250,000 rays were traced in this simulation.