It is recommended that you start FRED, make the changes described in this document, then close FRED.  This process ensures that the changes made to the FRED installation are saved to the registry.

Start by navigating to the View menu and toggling the Cells option of the Output Window sub-menu.  This option allows you to view the Output Window as a spreadsheet (which it is) rather than as an empty text window.

Next, open up the Preferences dialog by navigating to Tools > Preferences.
The Output Window tab allows you to control how many rows and columns are available at any given time.  Personally, I like to keep a lot of history in the Output Window so that I can scroll back through the FRED output and look for information.  I generally keep my settings at 10,000 rows and 24 columns.  Additionally, I disable the formula engine since I generally don’t use it and have encountered obscure problems with it in the past. 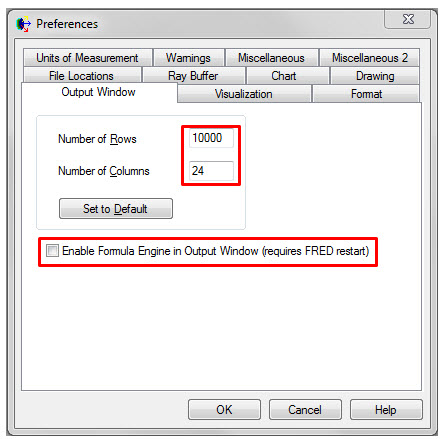 Next, move to the Visualization tab and make the following changes:
The Pixel Format setting controls whether the 3D view uses a “software” rendering mode or hardware acceleration using your graphics card.  The Fast option tells FRED to use the graphics card acceleration.
Multi-threaded tessellation is exactly what it indicates. When the 3D view needs to redraw, FRED will use as many CPU cores as are available. 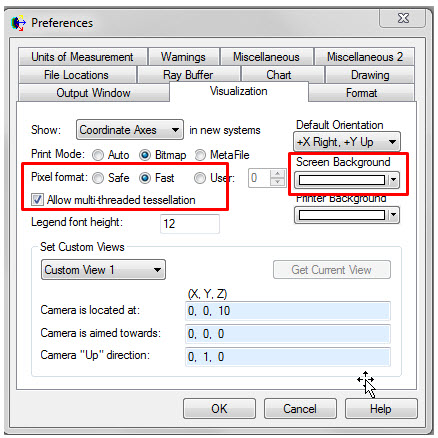 Move to the Miscellaneous tab of the Preferences dialog and duplicate the options below. 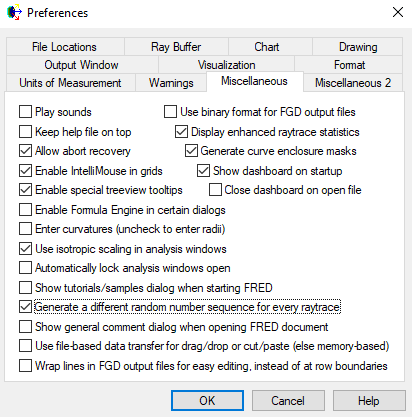 The most important settings for maximizing FRED’s performance are found on the Ray Buffer tab of the Preferences dialog.  Before we get to the specific settings, we will briefly comment on how the ray buffer works.
Ideally, all ray data would be stored in RAM so that it can be accessed as quickly as possible.  However, it is also dangerous to use up all of the RAM on a computer since this has the potential to cause unpredictable program behavior and system failure (despite Windows doing its best to detect and manage this situation).  When FRED is installed, the default behavior is to allocate some small amount of RAM to be used for storing ray information.  While this is predictably safe, it means that you cannot store very many rays in the small amount of RAM that is allocated for use by FRED.  Consequently, it is easy to generate more ray data during a trace in FRED than you have allocated RAM to store the data in.  In this case, FRED will temporarily store ray information in “pagefiles” on hard disk and then swap data between the pagefiles and RAM as needed when the ray information needs to be operated on.  While this behavior isn’t necessarily bad, it does impact the performance of raytracing since accessing data in RAM is significantly faster than accessing data on a hard disk (though the gap is narrowing).
Conceptually, we can depict this operation with the graphic shown below.  In FRED, a “frame” is a finite sized block of RAM that stores some number of rays.  The user gets to specify the total number of frames and the number of rays stored in each frame as preference settings, the product of these two values being the total ray count that can be stored in RAM at any single time (effectively dictating the amount of RAM being allocated for use by FRED’s ray buffer).  The image below indicates that we have specified 6 rays to be stored in each frame and 24 frames allowed in RAM, giving us 6 x 24 = 144 rays in RAM at any given time.
Now, what happens if we trace more than 144 rays through our FRED model?  The additional ray data cannot be stored in RAM, so it gets temporarily written out to a location on your hard disk and stored in “pagefiles”.  The ray data then waits there until FRED needs to access the information, at which time the data is swapped back into memory. 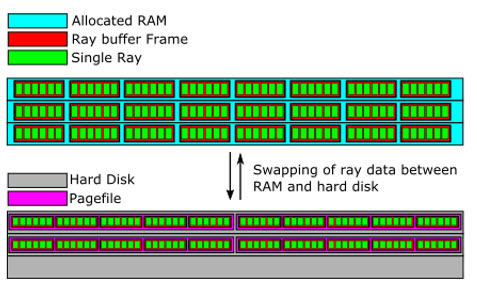 So what are the general rules for optimizing the ray buffer preferences?
Given the above statements regarding the allocation of RAM to FRED, let us look at a particular case.  The Ray Buffer tab of the Preferences dialog is shown below with its default settings. 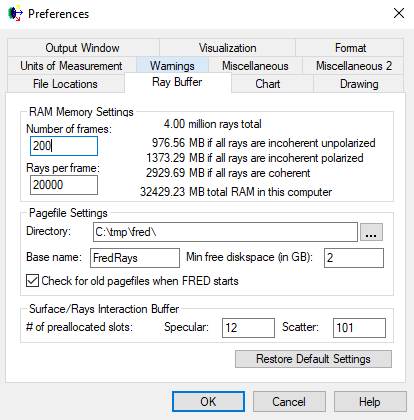 his copy of FRED is installed on a computer having a total of 32GB RAM.  The C: drive is an SSD.  As shown in the dialog above, FRED will store 20,000 rays in each frame and use 200 frames for a total of 200*20,000 = 4,000,000 rays being stored in RAM at any given moment.  If more than 4M rays are generated during a raytrace, the excess rays will be temporarily stored in pagefiles in the C:\tmp\fred\ directory.  Furthermore, the 4M rays would consume ~976MB of RAM if they are all incoherent and ~2.9GB of RAM if the rays are all coherent.
Let us now modify the ray buffer preferences to take advantage of the 32GB of RAM available on this computer.  We don’t want FRED to use all 32GB of RAM, since Windows needs a certain amount of RAM to operate by itself (say 2-3GB) and we may want the computer running other applications in addition.  So, let us say that we want FRED to use ~25GB of RAM for storing ray data (and assume these are incoherent rays).  In the image below, I have adjusted the number of frames to be 5000, such that I can store 100 million rays in RAM at any given time.  I can expect that the 100 million rays will consume 24.4 GB of RAM and that any additional rays will be stored in pagefiles in the C:\tmp\fred\ directory.  While the pagefile location has no impact on performance in this case, since the C: drive is an SSD, it does allow put the pagefiles in a directory that is easier for me to find and keep an eye on. 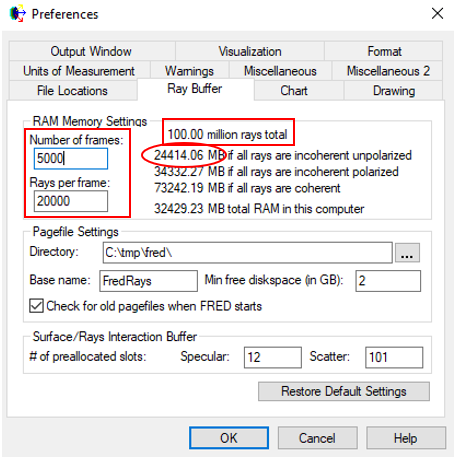 he only other option on this dialog that you may want to change is the “Min free diskspace (in GB)” entry, which by default requires 2GB of free disk space available in the pagefile directory in order to start a raytrace.  Generally speaking, this error isn’t encountered very often.