This example demonstrates how to use FRED's scripting language to automate the task of performing a raytrace and analysis inside of a loop.  A Plane Wave (coherent) type Source Primitive will be tilted over a range of angles inside of the loop and the resulting irradiance distributions for each configuration will be saved to a FRED Grid Data (FGD) file on disk.

The simple model consists of a plane wave source incident on a singlet lens element and coming to focus on an absorbing plane.  An analysis surface, "Plane_Surface", is located on the image plane and will be used when performing an irradiance calculation.  Shown below is the raytraced model when the source is configured to be aligned with the z-axis.

A common, repetitive task to be performed is to tilt the source to some incident angle with respect to the optical system and then perform a new raytrace and analysis.  In this model, a Plane Wave (coherent) type Source Primitive is used for the source representation (see image below).  The source tilt angle will be controlled by modifying the source's Location/Orientation settings.  At the bottom of the source dialog, three Location/Orientation operations are defined that have the following purpose:

Note that each of these operations has an index (0-2) associated with it, which we will be using in the script in order to "point" to one of these specific operations for manipulation. 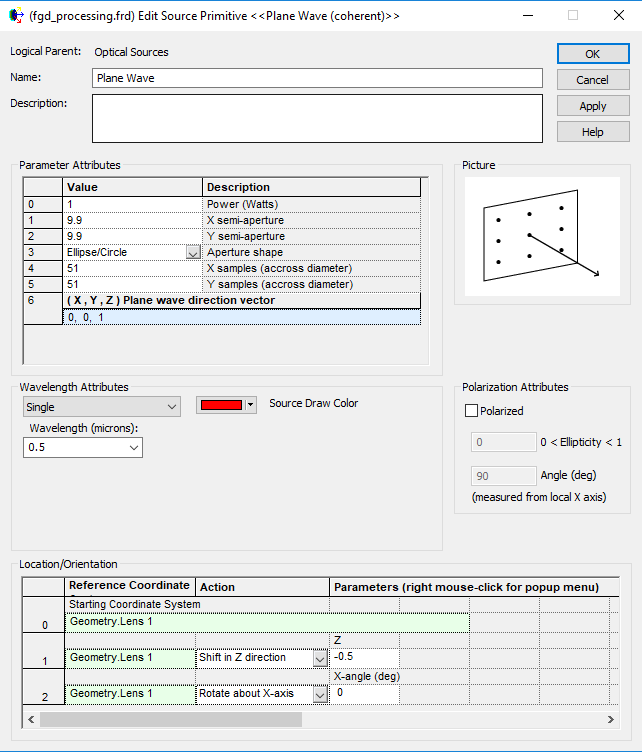 There are three scripts that can be found in the Embedded Scripts folder of the example file.  For the purposes of this KB article, we will be looking at the embedded script named, "Generate FGD files".  Double click on this script to open it in the editor.

The first portion of the script performs the following tasks:

The next block of code retrieves operation #2 from the source node and stores the information in a variable called "tOp".  What information is stored in tOp?  In the image of the source dialog above, operation #2 contains three pieces of information; the coordinate system that the operation is defined in, the type of operation being performed (an x-axis rotation in this case), and the value associated with the operation.  The GetOperation command could also have been placed inside of the loop, though it isn't necessary to retrieve this data each time inside of the loop (and is therefore wasteful from a programming perspective).  You can think of this GetOperation call as initializing the tOp variable values, which will then be modified and applied inside of the loop later.

The last part of the script simply prints a message to the output window indicating that the script has finished its task and then deletes all of the analysis results nodes from the Analysis Results folder.  Note that this last step is not necessary, of course.  The user may wish to keep the analysis results in the Analysis Results folder for review after the script execution, in which case this code can simply be commented out or deleted.

After executing this script, the output directory that was specified in the script will contain a collection of *.fgd files.  There will be one FGD file for each source angle that was raytraced and analyzed.

It is important to note that FGD files can always be re-loaded back into a FRED document by right mouse clicking on the Analysis Results folder and selecting the option, "Create New ARN From a File". 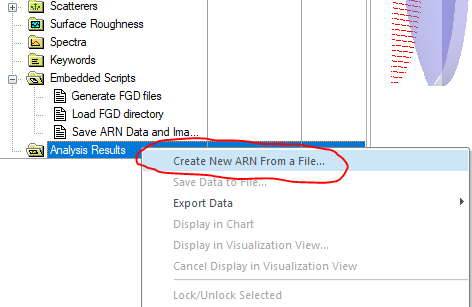