This knowledge base article will describe how to create a Gaussian scatter distribution using FREDs Scripted BSDF scatter model. This distribution is commonly used for simulating diffuser elements.

A scripted scatter model type can be created by one of the following methods:

Once the Scatter dialog has been opened, the Scripted (BSDF given by user-script) type should be selected.  The scripted scatter model is defined in direction cosine space using the incident ray, specular ray, and scatter ray direction vectors as shown below:

The normalization factor K is given by

For the Gaussian distribution we can relate the parameters A0 and B0 to the FWHM of the BSDF by the equations:

In the editor window for the scripted scatter model the comments header provides information regarding the available input and output variables for use in the BSDF definition. This scripted Gaussian scatter model will make use only of g_Xspec, g_Xscat, g_Yspec, g_Yscat and g_bsdf, corresponding to xsp, xsc, ysp, ysc, and BSDF as defined above.

The subroutine for the scripted scatter model is shown below:

For the values A0 = 30 degrees and B0 = 5 degrees, we calculate using the equations above that FWHMx = 49.95o and FWHMy = 8.33o. A model with a single ray incident on a scattering surface with this scripted scatter BSDF was raytraced to produce the following 3D BSDF plot in FRED.  The TIS at normal incidence is reported to be 99.956%, as expected due to the normalization factor. 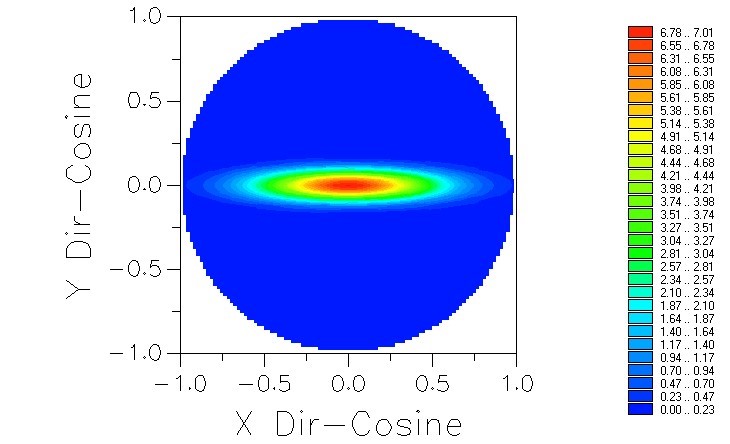