Light Emitting Diodes, or LEDs, have surpassed incandescent light sources in recent years for most applications. Benefits of the LED include compact size, high power efficiency, and a long lifespan [1]. LEDs also have undesirable qualities that optical engineers must address, such as the need for color mixing and collimation. In this example we look at a simple example of a hybrid collimator lens.

LEDs emit light over a full hemisphere, but most lighting applications require directional control over light output. A simple positive lens is not fast enough to refract large angles into a collimated beam. To redirect all emitted light, a hybrid refractive/reflective lens can be designed. One example of a hybrid collimator is shown in Figure 1. The centra portion consists of a positive axicon to refract rays with small emitted angles. The outer portion has sloped parabolic sides. This region utilizes total internal reflection to redirect rays with large emitted angles. 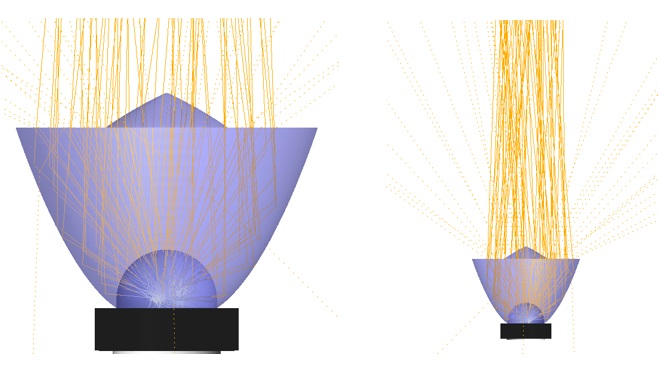 To evaluate collimating capability of the hybrid lens, intensity is evaluated on a detector plane located 1 m away from the LED. Intensity of +/-50° FWHM occurs without the collimator. After the collimator is added, intensity is reduced significantly to +/-6° FWHM (Figure 2).

[1] “New Report Explores the Global Industrial and Commercial LED Lighting Market to Be Propelled by Government Prohibition on the Use of Incandescent Lamps.” WhaTech. September 28, 2015. Accessed September 29, 2015.  https://www.whatech.com/market-research/consumer/97505-global-industrial-and-commercial-led-lighting-market-to-be-propelled-by-government-prohibition-on-the-use-of-incandescent-lamps.